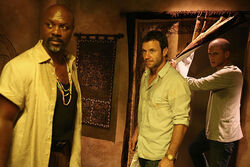 Bang and Burn is the eighth episode in Season 3.

Sammy is upset; the inmates keep uncovering Papo’s body. He tells Lechero that the inmates don’t fear them any more, and he’s doubly infuriated that Michael seems to have impunity. Lechero tries to convince Sammy not to kill Michael. Meanwhile, Michael brushes past McGrady, who has new clothes in honor of the fact that his father is coming to visit, and meets with Lincoln, who tells him LJ’s okay and they have four more days. Michael accuses Linc of using him like the Company did.

Gretchen meets with General Pad Man, who tells her it’s time to end this today – time for "bang and burn." She asks him to reconsider; he refuses. She meets with Whistler at the visitation fence and tells him they have to move today; be ready by 5pm. Whistler thinks it’s suicide. And Susan tells him to kill Michael. She then begins to organize a squad of helicopters.

Michael asks Lechero to get the Colonel to postpone the repairs of the bars on the windows, but Lechero says he no longer has any sway with the Colonel. Michael hides as Sammy arrives to report that more men are defecting; he wants to bring Cristobal into their gang, a wild-eyed, crazy, large man. Lechero agrees to meet with him.

A man named Tommy Day calls Sofia, claiming to be Whistler’s landlord, and asks her to come over regarding a broken pipe in his apartment. One of Susan’s agents is listening to the call. Meanwhile, a trembling Mahone, going through severe withdrawal, confesses to Lang that he killed Oscar Shales – and turned to drugs because he was wracked with guilt. He begs Lang to get him some drugs; any testimony he gives in this condition won’t be worth anything. However, before she returns, Sullins arrives and says it’s time go testify. Just as the panel begins, Sullins realizes how far gone Mahone is. Mahone says he can handle it, but he comes across as a ranting, paranoid, conspiracy-theory lunatic.

Michael tells Whistler they’ve got four days, and asks who the woman was he saw him talking to at the gates. Whistler says she was from the Company, and he’s getting to the point where he just wants out, he doesn’t care how. He later apologizes. T-Bag delivers a message from Lechero – a map of his room and the time 4pm. It’s 3:50 now. Whistler surreptitiously grabs a shank as they head towards Lechero’s place. They find a secret room with Lechero’s private stash of goods. Just as Whistler’s about to shank Michael, Lechero arrives, enters a code to open another door, and leads them to a secret underground tunnel that’s blocked by debris. Time to dig out… or up. To the middle of No Man’s Land. But they’ll need to build a support brace or it’ll collapse and bury them alive. Sammy arrives; Lechero only just manages to hide Michael. Whistler claims to be claustrophobic and tries to leave; Michael asks what he really wants. Just then, Lechero returns. Michael asks for his cell phone to call Linc. Lechero refuses and hurries them out of his room before Sammy returns.

At the mysterious apartment, Sofia finds shredded papers, and lots of documents, including a passport with Whistler’s picture and the name "Gary Miller." Susan arrives and says she knows where Whistler is, threatens to kill Sofia if she keeps interfering, takes the papers, and tells her to just go home and get ready to have Whistler returned to her.

Linc and Sucre hatch a plan. They record some gunshots on a boombox. They then rent a rundown old shack and set the boombox in the window; the gunfire sounds convincing. Linc admits he stole this plan from the film Home Alone, which he used to watch with LJ.

Michael asks McGrady to give his father a message – a phone call to make. McGrady doesn’t want to involve his father in Michael’s trouble, but Michael begs, saying Lincoln’s life is on the line. McGrady finally agrees.

Whistler and Sofia meet at the fence; he makes her promise not to go near Lincoln today – go home and stay there. Sofia asks about the apartment, not letting on she’s already been there. He denies knowledge of the place.

McGrady’s father, Alfonso, calls Lincoln and tells him "Don’t come home for dinner." Linc knows this is code to watch his back. Sofia shows up, trying to warn him something is wrong. Pike is watching. Susan orders them all killed. Linc scrolls through his cell phone’s history, looking for a particular number. It turns out to be Lechero’s phone – and Sammy answers. Linc says he needs to get a message to Michael; it’s life or death. Sammy asks how he got this number. Linc says "You called me a few days ago – I picked up but didn’t say anything." Sammy hangs up. He accuses Lechero of being in league with Michael, and storms off. Meanwhile, Linc and Sucre get the drop on Pike and kills him. Lechero confronts Michael and tells him to tell Linc never to call him again. He gives Michael his phone; Michael calls Linc and they realize that the Company are going to break Whistler out themselves – the brothers, Sofia and LJ have become expendable.

At that, Susan’s helicopter squad begins to descend upon Sona. Michael finds Whistler on the roof, where one copter is lowering a rope for him; another copter is opening fire on the guards. Michael grabs Whistler’s legs as he climbs the rope. The escape copter is hit by gunfire from Sona’s guards; Michael and Whistler fall back onto the roof. The other copter is hit as well. The pilots abort the mission. Susan, listening via radio, knows she’s in trouble. Whistler and Michael race back inside and quickly change their shirts, hoping they weren’t recognized by the guards in the distance. Soldiers once again storm Sona, led by a General Zavala. He confronts Michael – two escape attempts in two days, soon after Michael arrived? He’s caused too many problems in Sona, and is summarily removed by the soldiers, taken who knows where – with Whistler and Lechero now left to fend for themselves.

For fan theories about these unanswered questions, see: Bang and Burn (episode)/Theories