You may be looking for his counterpart in the "Prison Break: The Conspiracy". 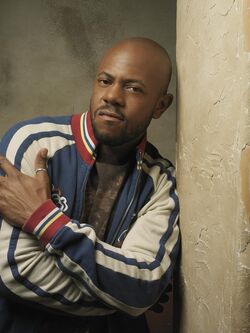 Benjamin Miles "C-Note" Franklin is a veteran ex-fugitive who was incarcerated in and later escaped Fox River.

Franklin was a Sergeant in the U.S. Army, stationed in Kuwait. While serving as a guard for a detention facility, he discovered illegal torture of several detainees and reported this to his commander. C-Note's commander dishonorably discharged him for his involvement in black market activities after C-Note refused to agree to keep quiet about the incident. With the shame of dishonorable discharge hanging over him, C-Note was unable to find other work to pay the rent for his wife Kacee and daughter Dede, and resorted to criminal means. His brother-in-law, Darius Morgan was a truck driver and suggested that he could help transport stolen goods. Eventually, C-Note was caught and because he would not give up the identities of his friends, he was sent to Fox River State Penitentiary.

C-Note eventually started working in the prison kitchen and gained a reputation as the "prison pharmacist", being able to acquire any item or substance for other inmates for $100, or a "C-Note" (which, in conjunction with his namesake's appearance on the bill, spawned his nickname). He and Michael Scofield first crossed paths when Michael asks him to obtain some PUGNAc to allow Michael to feign diabetes and thus gain access to the infirmary (a critical aspect of his escape plan). C-Note was curious but Michael refused to tell him what it was for.Short after C-Note encounter a new inmate called Tom Paxton he approached this last when he witness a fight between him and T-Bag forcing the respect of C-Note toward Tom Paxton.Inside the penitentiary C-Note has a lot of influence as a gang leader, he often asked the illegal fighting organisator Jeremiah King to form his henchman inside the prison. C-Note refused to deal with Michael after seeing him associating with T-Bag, leader of a white supremacist group in the prison and asked undercover Company operative Tom Paxton to find a new PUGNAC bottle in exchange of protection during the racial riot. He later reconsidered after seeing Michael apparently stabbing one of T-Bag's men during a riot, though his curiosity was not diminished.

He later became suspicious of the PI crew when he realized that they were discarding pieces of concrete across the prison yard from the hole they had been digging in the Break Room. After the PI head, John Abruzzi was briefly replaced by Gus Fiorello, C-Note bribed him to work in PI. He discovered the hole that Michael and crew had dug as part of the escape plan. When Abruzzi regained control of PI, C-Note threatened the crew to let him on board or he would tell the guards.

C-Note later became a respected member of the team when he helped the team out of several problems that nearly derailed the escape plan. He also befriended Charles Westmoreland as they both shared the same need to see their family again. One consequence of his joining the escape team, however, was C-Note being ostracized by other black inmates, ironically for the same reason C-Note had initially refused to deal with Michael: consorting with T-Bag, who had also joined the escape team. C-Note had two violent encounters with his former associates and only the escape prevented him from being killed.

After the escape, C-Note, Michael, Lincoln, Sucre, and Abruzzi met bigger problems as their escape plane took off and left them stranded with numerous police on their trail.

The next morning, C-Note, Michael, Lincoln, Sucre, and Abruzzi continued to run from the authorities, narrowly running past a freight train to evade their pursuers. C-Note started chastising Scofield for failing to openly disclose to the group the existence of Westmoreland's money in Tooele, Utah, and he also demanded that Abruzzi be abandoned because he took a young girl hostage when her father recognized the five as the Fox River escapees. C-Note was focused on rejoining his family, and the little trust he ever had for his fugitive comrades appeared to be wearing thin. His wife and daughter were, up until the start of second season, unaware of his incarceration as he had managed to trick them into thinking he is still serving overseas in Iraq. They learned the truth when his escape made the news.

By episode 3 "Scan", C-Note contacted his wife by pay phone, and she was quite upset with his lies and even doubted that he was ever in the US Military. C-Note promised to explain everything and that he would come into a lot of money soon. He said in 7 days, that they would meet at the "Rainbow Room" at the window where they had their picture. Eavesdropping FBI agents assumed they meant a city restaurant. C-Note later meets his daughter at school and asks her to tell her mother to turn the porch light on at seven o'clock as an indication of her trust. By the episode's end, C-Note is skulking about near his family's home, while an FBI Agent Lang interviews his wife.

C-Note then proceeds to make his own play for Westmoreland's money by taking a train to Utah. Borrowing a laptop and notepad from the commuter sitting next to him, C-Note accesses an online military database run by the United States Army Signal Corps to find the site where the money is buried. Unfortunately, midway through Preston, Idaho, an attendant tells him that the credit card used to buy the ticket is not valid. C-Note attempts to reason with him, but the attendant calls for security. Out of options, C-Note is forced to bolt out a window, into a nearby river. He passes through Cache County, Utah and inquires about an RV for sale. He is told that it will cost $40,000.00. C-Note replies that he will be back in a couple of days with cash.

He is later seen hitchhiking when Sucre, driving past on his motorcycle, agrees to give him a ride. They arrive in Tooele and are reunited with Michael. They proceed to dig for the money. Unfortunately, a house had been built over the burial site. Though the fugitives were initially able to fool the residents into thinking they were maintenance men, they eventually got wise. C-Note loudly voiced his disapproval to Michael about taking innocent people hostage, and his old tensions with T-Bag also resurfaced. But these feelings later give way to excitement when they finally dig up the money. Unfortunately for C-Note, Sucre chooses this moment to double cross them all and demands the money from them while holding them at gun point. C-Note immediately leaves for his family after seeing that the money is gone. In episode "Unearthed", he meets up with his old friends back in Chicago for help with executing his plan to reunite his family. He and his wife, Kacee, and daughter Dede finally have their reunion in an alley after a narrow escape from the federal agents.

In the episode "Disconnect", C-Note has a happy time with his family until his daughter complains of stomach problems. Kacee tells him that they don't have her medication, and they leave to find a pharmacy. While buying medication, the pharmacist recognizes Kacee, and on the pretence of needing change from the back room, calls the authorities. Kacee is arrested, but not before she drops the medication into the trash so C-Note could pick it up from there.

C-Note and his daughter return in "John Doe". C-Note is guilt-ridden over his wife's arrest, and tries to see if Kacee will be allowed bail. He plans for her to skip bail and rejoin him, and for the family to move to Alaska. However, Kacee's bail is denied.

In the episode "Chicago" C-Note and Dede are in a Benson, Minnesota diner when Dede sick due to her lack of medication. C-Note prepares to leave when suddenly, a man holds up the diner with a gun. After C-Note stops the man from holding up the diner, a female customer the robber was planning to kill lets him leave despite knowing his wanted status. Despite this, Agent Mahone receives a report that C-Note was spotted at the diner, and that his daughter was sick. Mahone arrives in Minnesota, but C-Note manages to evade him by boarding a train. After C-Note had to resort to painful means at a free clinic to help his daughter, he calls Mahone and offers to turn himself in if his wife will be released. Mahone agrees, and in return, C-Note must give him information on Michael - the website Europeangoldfinch.net, which C-Note overheard Michael telling Sucre about in Utah. When C-Note could not find Michael's location, Mahone forces C-Note to hang himself, under orders from Agent Kim, in exchange for his wife and daughter's well being. The episode ends just as C-Note jumps off his cell bed with the noose around his neck, but he is saved by a guard in the next episode. In the prison infirmary, he phones the FBI and demands to speak to Mahone, but Agent Wheeler (Jason Davis), who happens to be investigating Mahone, answers the call instead. Wheeler says he can keep C-Note safe if he tells him what Mahone asked him to do.

A week later, Wheeler has C-Note released from prison and placed in the Witness Protection Program in exchange for testifying against Mahone. C-Note is the fourth member of the Fox River Eight to be apprehended by authorities.

After he tracks down Sucre, C-Note explains that he is on the run again due to Internal Affairs refusing to hold up their end of the deal due to Mahone being incarcerated in Panama. C-Note also explains that he has been contacted by a mysterious man (Paul Kellerman) and asked to locate Michael and Lincoln to help them destroy The Company. C-Note and Sucre save the brothers from certain death in the penthouse of the General and later receive full exoneration for their efforts. In the series epilogue, C-Note is revealed to have become a UPS deliveryman, matching his specialty in prison: to get his fellow inmates any random material.

After seeing the letter with Michael's image on it from T-Bag and discovering a decoded message that shows Ogygia, a prison in Yemen, Lincoln contacts C-Note who is revealed to have converted to Islam. Lincoln and C-Note discover that all traces of Michael, including photos, have been erased from existence. C-Note runs the possibility that Michael may have gotten involved in this mess himself as he is too smart to take orders from another person. C-Note and Lincoln head to Yemen to find Michael but are led into an ambush when they take the wrong taxi, led by the people who ran Lincoln's car off the bridge and tried to kill Sara in her home. C-Note and Lincoln are able to fight back their attackers and escape with one of C-Note's contacts named Sheba. Omar sets C-Note and Lincoln up with a visit to Ogygia to see Michael, going by the name of Kaniel Outis, angering Sheba since Outis is the name of a terrorist working with ISIL. Upon meeting with Michael, C-Note records him on a video camera as proof that Michael is alive.

Alongside with Sheba, he helps several Yemeni children to flee their country.