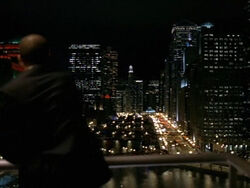 The Chicago River is a river flowing through the city of Chicago. Michael Scofield owns an apartment at 333 N. Canal St. Chicago, IL near the river. He threw his hard disk from his balcony into the river. (1x1) The same place was later revisited by Mahone's team, trying to recover Michael's hard disk.