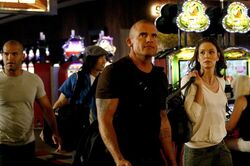 Directed by: Garry A. Brown
Written by: Christian Trokey
Airdate :

Five The Hard Way was the seventh episode of the fourth season of Prison Break.

Gretchen threatens, questions, and cuts T-Bag about how he has assumed the stolen identity of Cole Pfeiffer. He tells her that he followed Whistler's bird book to the bus stop, then to Gate Corporation. She threatens to kill him if he doesn't help her, and he accepts her proposal.

At the warehouse, Agent Self yells at the team for falling behind of copying Howard Scuderi's card. He left for Las Vegas and the team didn't know how long he would be there. Self talks with Mahone about how he should protect himself from Wyatt. Alex tells him to "bring the game" to the Company, as it was the only tactic (used by Michael) that affected him.

Bellick receives a phone call from the receptionist at Gate who tells him that she knows where T-Bag is. After talking it over with the team, Michael sends Lincoln, Sucre, Sara, and Roland to Las Vegas to copy Scuderi's card, and takes Mahone and Bellick with him to capture T-Bag and get the bird book. It turns out that the receptionist was being used as a decoy by T-Bag and Gretchen, and Michael, Bellick, and the receptionist are kidnapped and taken to Cole Pfeiffer's apartment while Mahone escapes.

In the General's office, Wyatt tells General Krantz that it is important to "take out" Self before he gets to be any bigger of a nuisance. The General agrees but tells him to make it look like an accident. Wyatt tells the General that that costs double. Agent Self, searching through files, receives a call from Mahone who asks for the locator of the GPS ankle monitors to find Michael. At the same time, Gretchen notices the ankle monitor on Bellick. T-Bag forces Michael to solve the clues found in the bird book, but Michael knows Mahone is following his GPS signal so he stalls.

In Vegas, the team is unable to copy the Scylla card in the casino because of all the other electronic equipment. They later find Howard Scuderi out by the pool, and Sara trys to seduce him to invite her to his room. After a rude encounter, she finds out from the bartender that Scuderi is interested in men. Lincoln tells Sucre that he is going to have to try to get up to Scuderi's room instead.

Back in Los Angeles, Gretchen meets T-Bag's old co-worker at Gate and kidnaps him. Having figured out the ankle monitor scheme, she had moved Bellick, Michael, and the receptionist to the receptionist's house. Gretchen murders the Gate employee in front of the receptionist and Bellick, and Michael reveals to T-Bag that he has pieced together the pieces of the bird book into a blueprint.

Agent Self meets with the General while Wyatt discovers Self's house to be abandoned. He confronts the General and tells him that if he is found dead, an investigation will be launched against the General, who tells Self that he isn't the first to confront him, and that he will probably be lured over to the Company's side. At the same time in Las Vegas, Sucre visits the pool and takes his shirt off. Scuderi asks him if he wants to make some easy money and invites him up to his suite. There, it is revealed that Scuderi is a war veteran and has no reproductive ability and needs Sucre to please his very attractive wife. Roland successfully copies the card with the device.

At Gate, T-Bag and Michael discover a door in the floor of the closet of Cole Pfeiffer's office. It leads to an underground tunnel where Michael and Mahone, who had followed his hint to Gate, lock T-Bag in a utility closet. Agent Self informs them that T-Bag will be kept in protective custody until the Scylla capture is complete so he doesn't leak any information.

While leaving the casino, Roland stops to abuse his device's ability and cheat at a slot machine. He is recognized by the security team who kick him out of the casino and keep his device. Lincoln and the rest are very upset because they still need to copy one last Scylla card. Meanwhile, in Los Angeles, Michael, Mahone, and Agent Self receive a call from Gretchen who offers to help them in the quest to take down the Company if they release T-Bag.

"Most fans will probably be satisfied with an action packed edition with some excellent developments. But I think something is lost when so much is crammed in."
―The TV Critic's Review