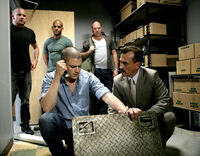 Greatness Achieved is the ninth episode of the fourth season of Prison Break.

Michael, Lincoln, Sucre, and Bellick follow the blueprints from the bird book underneath GATE Corporation that leads them to a main water conduit. After failing to dig underneath the pipe, they decide to tunnel through it and into to Company headquarters. While Lincoln and Bellick are sabotaging the water main, Michael begins having severe health problems and Sucre is forced to cut into the water main on his own. Lincoln and Bellick return just before the water is turned back on to place the pipe for the tunnel. However, the pipe slips and Bellick, knowing what the end result will be, decides to jump into the conduit and hoist the pipe through the water main and thus unable to escape. It is presumed that he drowns in the pipe.

Meanwhile back at the warehouse, Agent Self, Mahone, and Sara are deciding what to do with Wyatt. Self figures out a way to record Wyatt's voice onto a tape recorder to send a message to General Krantz saying that Lincoln and Michael are dead. The General believes the message and that the brothers are dead, however, Gretchen breaks into his office at this time and puts a gun to him. The General says that he wants Gretchen to work for him once again and that it everything that happened was all part of his plan. After the message from Wyatt goes out to the General, Self and Sara leave the warehouse so that Mahone can be alone with Wyatt and Mahone begins to torture him in revenge for the death of his son. Mahone forces Wyatt to call Pam and tell her that he is sorry for killing their son (realizing that Wyatt himself now has an epiphany for the misdeed he's done). Mahone then takes Wyatt outside with a cinder block tied to his arms and pushes him in the river.

Back at GATE Corporation, T-Bag's boss returns from his trip and discovers that T-Bag's co-worker Andrew is missing. He calls the police and a detective comes and asks T-Bag questions about Andrew and his relationship with him. After running out of options, T-Bag pulls his own falsified records and presents them to his boss as Andrew's, stating that Andrew's sales records are falsified and that it could cause a lot of trouble for the company if investigated. This makes his boss call off the investigation and inadvertently covers up T-Bag's involvement in Andrew's murder.