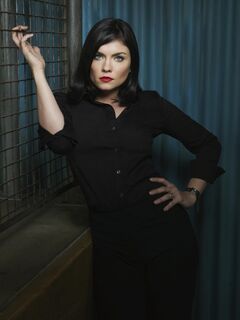 Gretchen Louise Morgan, also known as Susan B. Anthony, was a former soldier and a high ranking operative for The Company.

When Theodore Bagwell was looking through Gretchen's file, he mentioned her father. She worked for the Company as a high-ranking operative, and conceived her child - Emily Morgan - from General Jonathan Krantz, who was presumably her lover at the time. Gretchen shows, through early flashbacks, how she was imprisoned and tortured during the Iraq war, something that has left her tough and resilient, but also empathetic in her weaker moments. When she is tortured by General Zavala, Zavala observes how she does not break down during torture, and notes that it is not the first time she has been tortured.

She first appeared hiding her scratch on her cheeks with make up. Later, she lured Lincoln to meet her at Garfield Price Building by telling L.J. Burrows, whom she hold as hostage, to inform Lincoln about the meeting. She later reveals how much she knew about the brothers and offered Lincoln to watch a video: Inside the video, L.J. Burrows and Sara Tancredi are hold as hostages. She told Lincoln to tell Michael that he needs to break James Whistler out from Sona or both Sara

and L.J would be killed. (3x1) She told Lincoln to meet her at the bar everyday to report what's going on. She threatened to kill Lincoln after she learned that Lincoln took something from Whistler's girlfriend, Sophia. (3x2) When Lincoln asked if he could talk to Sara, she first refused but later agreed. After knowing that Lincoln tried to break Sara and LJ out, she warns him not to do that again. (3x3) She claimed to have killed Sara and put "her head" in a box as a punishment to Lincoln. She later killed the Gravedigger as she thinks he will turn them in. (3x4)

After Michael broke James out of Sona, Gretchen met with Michael at an abandoned warehouse but James ran and later exchanged LJ and Sofia for Whistler in a high security building. Whistler then meets with Mahone and offers him to join The Company with Gretchen waiting outside.

Despite claiming to have personally beheaded Sara, it was revealed that she lied and that the head in the box was from a cadaver. After Sara tried to escape, Gretchen tortured her as 'punishment' with a bull whip. Later Sara managed to successfully escape with the guard's key and Gretchen knew she had lost leverage against Michael so she planned the fake death to spook the brothers into cooperation out of fear for L.J. She was ordered to get Scylla with Whistler, but he copied it and gave Gretchen the fake one, which she gave to General Krantz; she nearly lost her life as a consequence, but at the end of the episode it is revealed she was sent to a "special" prison, where she was tortured for several days. However, she managed to kill the guard by strangulation and stabbing a nail into his head before escaping.

After her escape, Gretchen decided to turn rogue and went after Whistler's belongings and managed to acquire the location of the place where T-Bag is staying. She found the place and confronted him with the use of interrogation regarding Scylla. In the episode Five the Hard Way, Gretchen decided to work with T-bag to force Michael to reveal all the necessary information regarding Scylla. It is revealed that she has a daughter who is living with her sister. It is also revealed that Gretchen was captured, raped and almost murdered by bandits during a mission in Cambodia, her life was spared after seducing General Krantz.

Gretchen winds up aiding Donald Self to find a buyer for Scylla with T-Bag holding her family hostage. After much gunfire and betrayal, Gretchen gets shot in the stomach. She is spared death by Lincoln Burrows and is left there. She is arrested but survives her injuries and is sent to a Miami prison.

In The Final Break, Gretchen is shown to be an inmate in the prison that Sara is taken to for the murder of Christina Scofield. When Gretchen sees Lincoln and Sucre standing outside the prison, she demands that Sara take her along in any escape plan they may be developing. While initially threatening, Gretchen eventually reveals to Sara that she simply desires to see her daughter, Emily, and to give her a necklace which she made herself. She proves her loyalty by saving Sara from an attacker looking to collect a bounty put out by the General, who is incarcerated in a neighboring prison. When the escape commences, Gretchen attacks a guard and gets stabbed in the leg. Knowing that she cannot escape without help, Gretchen asks Sara to choose to either leave her behind or help her, and Sara lends her hand. Finally, as Sara and Gretchen are on their way, Gretchen is spotted by guards. When asked whether or not she is alone, Gretchen refuses to reveal Sara's presence, and gets taken back into custody. This is the last time she is seen. Before leaving however, Sara sees the necklace Gretchen made for her daughter on the ground, and, knowing she would have been caught had Gretchen betrayed her, Sara secures it, so that she mays pass it along to Emily.

For her indirect kills see: