watch 02:03
Wiki Targeted (Entertainment)
Do you like this video?
Play Sound

John Billingsley was born in Media, Pennsylvania on 20 May 1960, and raised in Weston, Connecticut. John studied theatre at Bennington College in Vermont.

John Billingsley has a relation with Bonita "Bonnie" Friedericy, who is his wife. John also has 2 cats, who are taken care off by his wife.

John with his cat

Chi McBride as second one. Kristin Lehman as third one.
Add a photo to this gallery 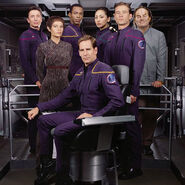 Dominic Keating at the left on the picture. John Billingsley far from the right.

John Billingsley as second on the left. Camille Guaty on as the fifth on the left row.
Add a photo to this gallery

Wikipedia has information related to:
John Billingsley
Retrieved from "https://prisonbreak.fandom.com/wiki/John_Billingsley?oldid=32973"
Community content is available under CC-BY-SA unless otherwise noted.