View source
watch 01:23
Wiki Targeted (Entertainment)
Do you like this video?
Play Sound

You may be looking for his counterpart in the show. 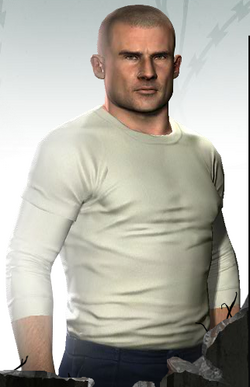 Lincoln Burrows is a character who appeared in Prison Break - The Conspiracy (Game).

Lincoln Burrows was born on 17 March 1970. After their mother's death, Lincoln became Michael's guardian. Lincoln dropped out of Morgan Park High School during his sophomore year and began his life of crime. Prior to being convicted for the murder of the Terrence Steadman, he had been convicted of theft, criminal damage to property, possession of drug paraphernalia, and battery. He and Lisa Rix had a son together, Lincoln Burrows, Jr. (L.J.).

When Michael was 18, Lincoln borrowed $90,000 to pay for Michael's university education, telling him that it was his half of his mother's life insurance. There really was no life insurance and this money was the start of the events which ultimately led to Lincoln being sentenced to death. Lincoln drop out from Morgan Park High School. He was the son of Aldo Burrows and Christina Scofield and the brother of Michael Scofield. He is the father of Lincoln "LJ" Burrows Jr..

Lincoln Burrows has been arrested and convicted for the murder of Terrence Steadman, a murder that he hadn't done, the brother of the VPOTUS and a notorious lobbyst in Chicago, Lincoln was soon sentenced to death by electric chair and sent in Fox River State Penitentiary. The murder was staged and Lincoln selectioned to be an assassin. In fact it was a scheme build by a shadow organisation called, The Company, to make a former Company executive (and traitor): Aldo Burrows out of hiding. But soon Burrows's kid brother, Michael Scofield showed up in the prison and begin to make the Company nervous about Burrows fate. The Company executive decided to send a flexible Company assassin spying the brothers in Fox River: Tom Paxton, former student of Aldo Burrows. Lincoln reunites in the prison with his brother who informed him that he's breaking him out. He encounters Paxton one time during the escape team's composition in the Warehouse of the PI yard. During the full scale riot he's knocking out during a fight with Theodore Bagwell's gang in the way of finding his brother Michael, he managed to knock out Charles Westmoreland who tried to hold him and followed inmate and Company asset Turk, who claimed knowing Michael's location' in the boiler room were he try to kill him. But Burrows accidentally pushed Turk over a ledge and try to interrogate him in vain. Agent Paxton tried to killed Burrows himself but was stopped by guard and Burrows and Scofield's conduct to their cells. A few days later, Burrows and Scofield heard a conversation between Tom Paxton and John Abruzzi stating that he knowed that Turk has been set to kill someone which grown up Burrows suspicions toward Paxton. Richardson revealed that he should kill Lincoln Burrows, but Tom said that wasn't his mission. Somehow Aldo Burrows had contacted Lincoln and informed him about Paxton real status and the existence of Agent Jack Mannix, Company's agent handler and advisor who is at the origin of the operation. Hours before the break out Mannix is sent by the Company to dispose of Burrows and Paxton, he managed to get to the SHU and try to kill Lincoln, but he was saved by turn coat agent Paxton who managed to make Mannix on the run. Before going to infirmary Lincoln makes Paxton known that the's aware that he's on their side and told him that Mannix musn't get away. Lincoln escaped from Fox River with Michael, Sucre, Westmoreland, T-Bag, Abruzzi and C-Note. He later becomes one of the Fox River Seven.

Community content is available under CC-BY-SA unless otherwise noted.