Prison Break Wiki
Register
Don't have an account?
Sign In
Advertisement
in: Out of universe, Actors, Season 1 actors,
and 4 more 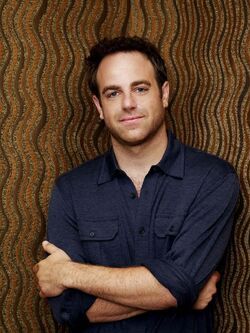 Paul Adelstein (born April 29, 1969) is an American television and film actor, famous for playing the role of Agent Paul Kellerman in the television series, Prison Break.

Making his film debut in 1990 in The Grifters, which starred John Cusack, Adelstein's next film appearance was in a 1997 movie called Peoria Babylon, which starred Ann Cusack. He then went on to appear in several television series which include Cupid, ER, Without a Trace and Scrubs. In 2003, he portrayed a character (Steven Kellerman) in the Law & Order: Special Victims Unit episode, "Mercy", whose last name was the same as a character he later played on Prison Break.

Adelstein's ex-wife is actress Liza Weil, who plays Paris Geller on Gilmore Girls. The two married in November 2006. Adelstein is also lead singer and guitarist of a band called Doris.