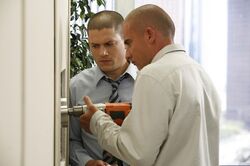 Safe and Sound was the fifth episode season 4 of Prison Break.

After stopping to look in her purse, Sara notices she is being followed. Wyatt chases her down a hill and across a busy intersection, but ultimately loses her because of the traffic.

Agent Donald Self is talking with Michael in the warehouse about enhancing the images from the video he captured. As Self looks at the evidence the team has pinned to the whiteboard, he recognizes a man. The cardholder is Oren, who works in the Department of the Treasury. Michael gives the device to Self and tells him that he must capture the Scylla card himself. Self visits the Treasury Department and talks to the cardholder about a made-out terrorism plot involving bonds. The man says he has no time for Self and unless he has evidence he doesn't want to see him again. He informs Self that he is leaving for Asia and that he doesn't want any complications on his trip. When he opens his safe, Roland picks up signal from the key card, but when he closes it soon after, Roland loses signal.

Although Agent Self does not believe Michael and his team can do it, Michael plans a break-in for the building. Using Self to lure out the man from the neighboring office and spill a mess on the floor, Sucre and Bellick act as janitors to make a vacuum noise while Michael and Lincoln drill into the back of the safe. After a close call with a secretary, Michael and Lincoln finally breach the contents of the safe. At the same time, the General of the Company and Oren have a short meeting in Oren's office. The General wants Oren to keep the card on him at all times, and just as the card reaches 100%, Michael closes the hole on the safe and neither men know any better. All four leave the building in Agent Self's van.

Meanwhile, T-Bag is criticized for planning to make sales rather than making any sales. He knows that he has to hurry up and solve the bird book before he is caught to be an impostor. When Sucre and Bellick, sent by Michael, inquire with the secretary of the Gate Corporation, she lies about seeing T-Bag. She then blackmails him for 3% of all his sales commissions. T-Bag does make a discovery in the book when he rubs lemon tea on one of the pages, revealing a sketch.

Mahone meets with his wife at a diner and she nearly vomits when he shows her a picture of Wyatt. She tells Mahone he was a good hearted man and the only thing keeping her going through the pain of losing her son, is knowing that Mahone won't rest until the monster that is Wyatt is gone Back at the warehouse, Sara informs him and Michael that she was followed and confirms it to be Wyatt. Roland and Mahone track her credit card information and narrow down a list of hotels where he might be staying. When he questions a clerk, he is first lied to but eventually gets Wyatt's cell phone number.

At the same time, Wyatt tortures Gretchen with a bucket full of foul-smelling material. When his assistant goes in later to give her a fresh bucket of urine, she murders him with a nail she clawed out of the chair and escapes.