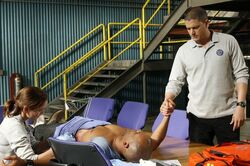 The Price was the eighth episode of the fourth season of Prison Break.

The Scylla recovery team has no choice but to stage a staged "hit and run" collection of the General's last Scylla card. Lincoln came up with the plan, having used it in 2001 in Chicago, before he was sent to Fox River. Other members of the team think it is crazy, but because it is the final card and Roland's device is gone, they have no choice.

At a church, Agent Self, Gretchen, and Michael talk about their motives for collecting Scylla. Self allows Gretchen and Bagwell to join the team because they have valuable information from Whistler's bird book.

Back at the warehouse, Michael scolds Roland for losing the device and tells him to either stay out of their business or go back to prison. The rest of the team then discusses how the plan will work. They map out the General's route and decide to attack him near the beginning of his route. Using a junk yard car that they can abandon, Sucre and Lincoln will ram the General's limousine. Michael and Sara, posed as paramedics in a stolen ambulance, will sedate the General and copy the card directly to a laptop. After discussing the plans, Lincoln and Sara talk about Michael's nosebleeds and how they happened to their mother before she died. Sara tells Michael that she is concerned about his health.

Meanwhile, Roland sends a text message to Wyatt offering to sell the brothers out.

After Self distracted the guard at the impound lot while Lincoln and Michael steal the ambulance, Michael confronts Lincoln about telling Sara about his nosebleeds. Self then receives a call to Gretchen and passes an invitation on to Sara to let her clear her anger with Gretchen out before they start working together.

At Gate, Gretchen, T-Bag, and the secretary talk about how to break in and steal Scylla, and she reveals that Scylla is more than just a black book. A gang of Asians break in and assault T-Bag and recognize Gretchen. They threaten her, but she makes a deal to obtain Scylla and sell it to them for $125 Million. When they leave, Gretchen offers $25 Million to Bagwell, and tells him that she doesn't plan on Scofield and the rest being alive once they help he get Scylla.

Lincoln and Sucre wait in the car, waiting to ram the General's limousine. Mahone gives them the notice that the General has left his office and is headed to their target location. In the ambulance, Sara tells Michael that he can confess any of the symptoms of the possible tumor to her if he sees them. As the General approaches the target spot, it turns around because Roland had informed Wyatt of the plot. Wyatt then shows up and fires his gun at Lincoln and Sucre, hitting Sucre in the stomach. Back at the warehouse, Bellick helps Sara treat Sucre despite the fact that he is afraid of blood. Michael then approaches Roland, accusing him of being a traitor. Roland lies and makes excuses, and Michael hands him the laptop and asks him to do some research.

At the same time, Self informs Gretchen at Gate that she is not superior to him, and that if he needs to he will kill her and T-Bag. The Gate secretary hands Gretchen a clipboard, but Gretchen sends her away. T-Bag goes to "control her" but talks about collecting Gretchen's fingerprints for insurance reasons. He tells her their project is only worth $1 Million and slaps her so Gretchen thinks he is being harsh to her.

Back at the warehouse, Self calls Michael and tells him that Roland has taken off his GPS ankle braclet. The team look around for him and notice that he has stolen a car and the laptop. At an unknown location, Wyatt and Roland meet. Wyatt shoots Roland twice before Roland gives out the location of the warehouse. When he does, Wyatt shoots him in the stomach.

At a motel, Sara meets with Gretchen. She has been plagued by bad memories of Gretchen beating her when she was in captivity in Panama. Gretchen offers to let Sara beat her, but she instead nearly slits Gretchen's throat, angry that she killed a woman who attempted to help Sara escape. Gretchen leaves, telling her that they are "even," but Sara doesn't agree.

Immediately after Wyatt kills Roland, Michael, Lincoln, Brad, and Mahone attack Wyatt. They tracked Roland with a GPS chip in his laptop. Mahone takes several good punches toward Wyatt, but they keep him alive.

General Kranz has been upset at all the commotion regarding his security. He knows it is not an attack on his life, but on his card. He then tells the other Scylla card holds that they must move Scylla immediately. Lisa Tabak complains that it is too large, but the General is deadset.