Under and Out (episode) 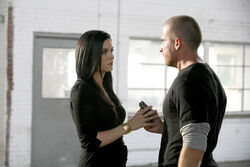 Under and Out is the eleventh episode in Season 3.

Michael tells his escape cohorts they have 24 hours to re-dig the tunnel - and it took three days the first time. He still has no idea how they're getting around the guards. The others are not happy. Later, T-Bag tells the others that last time they broke out, Michael screwed them all over. As the escape tunnel is dug, Bellick offers to work security for Lechero on the outside. Suddenly, water is dripping into the tunnel. It's raining - and a sinkhole is beginning to form. The ground won't hold until tomorrow. The only choice is to leave now, tonight.

Lincoln and Sofia, a romance possibly brewing, drive up to the Sona visitation fence, where Michael asks Linc to help figure out how to get around the guards, and confesses his discomfort with helping break out men who genuinely belong behind bars, and with turning Whistler over.

On the terrace, McGrady confronts Michael about being left behind. Michael says he's doing him a favor.

Michael forms a plan that includes cutting the power; the hitch is the backup generator. He calls Linc and tells him about the change in plans, and asks him to get a hold of Sucre - who is currently in a meeting with Susan. Sucre tries to lie to her, but she sees right through him - and she's found the bomb he left in her car. She threatens Maricruz and Sucre's unborn child, and Sucre caves, telling her that Michael's having second thoughts about handing Whistler over. Linc calls Susan to tell her the escape's been moved up to tonight. Once Susan dismisses Sucre, she consults with an agent, who has been watching Sofia's apartment. He can't get a good eyeline to watch her, which makes Susan suspicious. Sofia is trying to open the mysterious silver case of Whistler's. She gives up, and hides it under her bed before she leaves.

The digging is endangered when a food delivery truck nearly drives into the sinkhole, but it gets caught in the mud and goes no further. Meanwhile, Sofia is grabbed by a gloved figure.

As the escape team works to create a way to cover the hole after they leave, Bellick suggests to Mahone that they team up and nab the others after the escape, to bring them home to face charges. Mahone tells him he should go his own way after the escape; the only thing a partner will get him is caught.

Sucre gets the model number of the generator to Michael, and asks how they're getting around the jeep patrol. Michael says they'll just have to take their chances. But Sucre has an idea...

Linc meets with Susan, and finds Sofia there. Meanwhile, Michael calls the company that makes the generator and asks about the lag time. Linc calls and asks for Whistler; Susan gets on the phone and begins torturing Sofia with a lit cigarette. She demands the coordinates by the end of the day; she doesn't care if they escape or not. Whistler agonizes over his decision. Michael knows that LJ is dead if he hands the information over.

Back to digging, and T-Bag suggests teaming up with Mahone to kill Whistler and screw Michael. Meanwhile, as Linc tends Sofia's wounds, he accuses Susan of being scared and desperate. She claims that if he really understood what was going on, he'd know she and the Company aren't the bad guys - they're doing the wrong things for the right reason. And if Whistler gives them what they want, maybe she won't have to kill Linc.

Whistler's deciphered the coordinates at last, and tells Michael he's decided to hand them over. Michael begs him not to; it'll make all the loss so far be for nothing.

Sucre surreptitiously sabotages the jeeps, but he is confronted by his boss Rafael in the parking lot, who pulls a gun on him. It seems that his assumed identity, Jorge Rivera, has a warrant out for his arrest.

At visitation, Whistler and Michael face Susan, Linc and Sofia. A sorrowful Whistler says that everything that's happened to everyone - including Michael and Linc - is because he took the charter job for the Company. He takes out the coordinates... and rips the paper in half. He says he'll only give up the coordinates when Sofia, LJ, Michael and Linc are safe. She agrees - but she wants the information by a deadline, or LJ and Sofia are dead. She pushes a stopwatch through the fence - and then grabs Sofia and leaves.

Michael tells Linc he'll need to cut the power from outside the building at 5:15am. He then realizes - if they're holding onto Sofia until the exchange, who's picking them up?

Michael talks to McGrady again about the consequences of escaping. McGrady still wants to join them. Michael finally agrees, but says he cannot be responsible for him. He goes to the tunnel, which the others have finally finished building and bracing. Time to go as soon as the power is cut. They'll have 30 seconds of lag time before the backup goes on. The others can't believe the time is so short; T-Bag and Lechero take this surprise revelation as confirmation that they can't trust Michael.

Time to escape. Lechero and T-Bag object to McGrady coming along. And then T-Bag puts a knife to Whistler's throat - either T-Bag, Lechero and Bellick go up first, or Whistler's dead. Michael is forced to agree. Mahone decides to stay at the back - he's learned not to turn his back on Michael. Linc can't reach the junction box, so he steals a bus and rams it into the pole. The lights go out. Michael begins counting down the thirty seconds they now have to escape.

" A superb character and tension episode to set up the season finale. The writers deserve huge credit for not losing sight of the characters in the drive to create an intriguing escape plan. The actors too are on top of their game and this fine ensemble cast really pull together well here."
―The TV Critic's Review